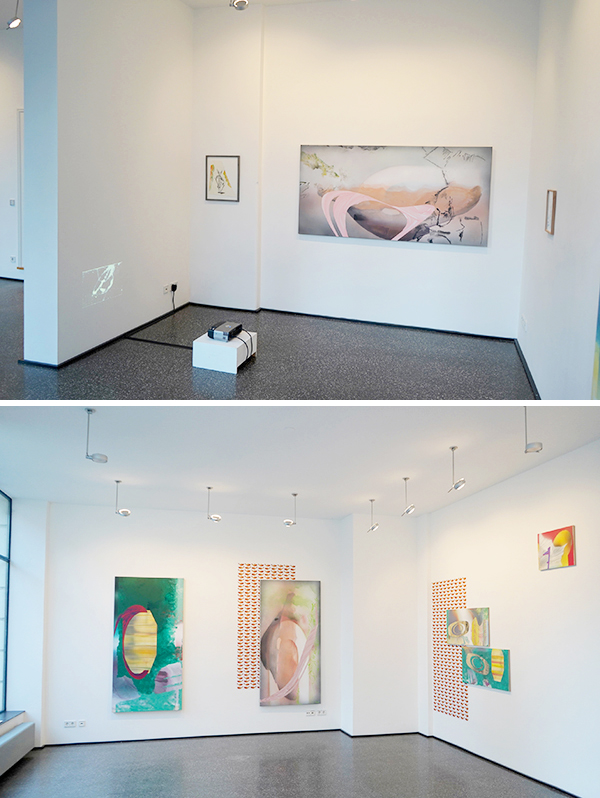 The exhibition runs until 31th of January 2021!
The works of art can be viewed through the gallery's shop window.

Due to the ordered lockdown, the gallery is closed until January 31th.

The third exhibition by the Munich painter Bruno Kuhlmann in the Artoxin Gallery presents his current work from the last few months. As the artist continues his thoughts that revolve around the meaning of painting in the 21th century.
Bruno Kuhlmann stages paintings that offer the viewer abstract spaces and landscapes with inventory. He shows painted small, sketchy scraps of paper that challenge the eye to see for itself and weaves in small video projections, that animate the picture to run by lining up as stop motion or by fading. The classic figure-ground theme seems obvious: abstract forms appear in front of a surreal stage, here spelling. Each of the paintings presents individual forms, abstract and yet with a meaning.
The titles refer to it explicitly. A video loop is also called “SPOngE BoB's ALPHAbet”.
Bruno Kuhlmann asked himself the question a while ago: “Is it possible today to give birth to a modern form of painting of the 21st century? And what would that mean? ”With this in mind, he first began to digitally sketch and then paint pictures that programmatically staged a form comparable to an initial. You would like to make an analogy to the vocabulary that a Kandinksky developed with his work “Point and Line for Surface”. The works on paper seem like the material that the artist offers the viewer as a loose and relaxing game with his perception.
And why does the artist call this exhibition 'the onion system' and not 'the alphabet'? One is literal, the other unites the multitude of levels of meaning. In the exhibition, a wallpaper that takes up the format of a picture points to this principle, with a shiny golden onion skin in a repeat. A video loop shows the hectic continual chopping of onions. Just as an image is built up in infinite layers, it also generally happens with perception, behind one meaning an infinite number of others open up. And the picture is created in the eye of the beholder. The dismantling and uncovering of the layers often does not do it justice and leaves only peel, makes the eye water easily.