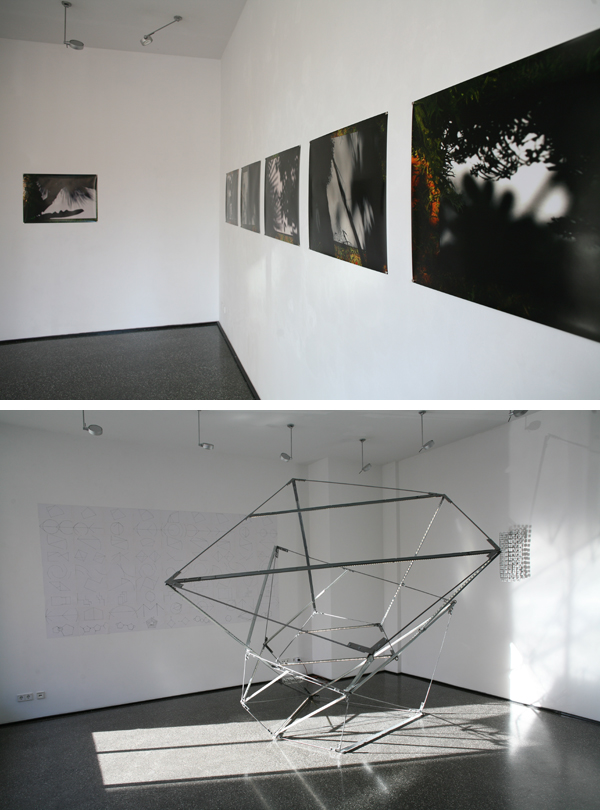 Light in the sense that the Old Master painter used it as a focus on the most important or magical scenery. But light could also cause an irritation. Light and its contrast darkness, show a complex status or let relations only divine. Also "colored" blackness can produce strong colors. Light as a trans medium for narrative images in gray shadows to clear lights. A conglomeration of light and shadow can create a new dimension, figure or story. The shadow, as a snapshot is actually a static state, but is transformed by the light in a dynamic process.
Photography by Hertha Miessner

As a sculptor, Uwe Jonas has been constructing and building metal sculptures alongside his stone sculptures for a few years, and is experimenting with LED light bands, as his series "Fluxvektoren" shows.
The works of the sculptor follow in the footsteps of the Concrete Art and the white objects of the group ZERO. However, they extend their concepts and traditions to the natural appearance of the material and its surface effect and the precise sculptural work that nevertheless takes into account the structures of the stone. Thematically, Jonas deals with the relationship of the carefully designed item to the mathematically rigorous overall form of his sculptures and installations.