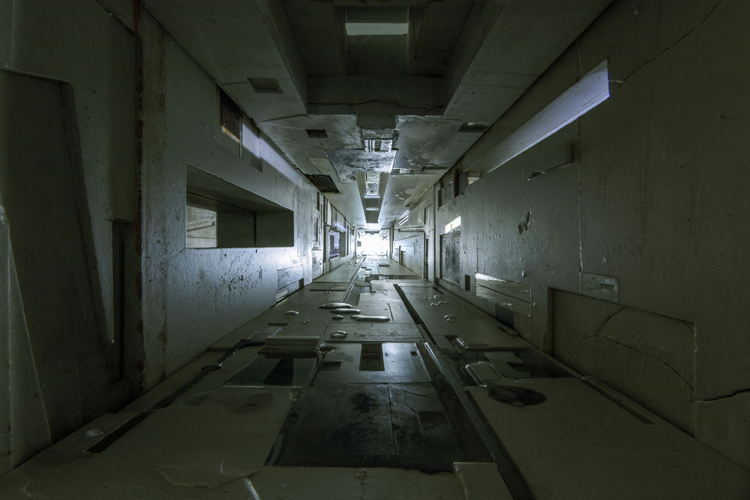 Ben Goossens had already developed his own position during his studies at the Academy of Fine Arts in Munich. His video and photographic works, which are effectively staged with astonishingly simple means, are characterized by a strangely intense pull that casts a spell over the observer's gaze and at the same time puts it into question.
In dystopian seeming settings proportions are unclear and the locations shown turns to mystery. Are the industrial ruins full of mercury residues or abandoned archaeological sites buried under dust? In front of us, the incoming light illuminates how time affects space. Are there still people? Deserted, what unfolds here. A past? A future? And in everything we have the size of the universe in mind with its swirls of electromagnetic radiation and intergalactic fog.
For some time Goossens has been working on his next big video titled »Transition«, which will keep him busy for a longer time. Independent photographs from the project already exist, they can be seen in the exhibition. If everything succeeds, because Goossens's work is always an open-ended experiment, arToxin will also be showing the premiere of another upcoming Goossens video - Stardust - that incorporates the solid and the fluid as a further transition. The artist's first new moving images since his hallucinatory video »Cosmic Vortex«, from which two photographic works are presented in the exhibition. We are curious! Are we still on earth? Nikolai Vogel, July 2018
Ben Goossens was born in 1982 in Munich. He studied sculpture with Stephan Huber at the Academy of Fine Arts in Munich and graduated in 2014 with a diploma. In the same year he received a project grant from the Erwin and Gisela von Steiner Foundation, 2016 the Art Prize of the Bavarian Academy of Fine Arts, the BBK's debutant grant and the Fine Arts Grant of the City of Munich. In 2015, arToxin exhibited its first exhibition with the artist titled "The beginning is empty".